In recent years, companies have paid me $5,000, $7,500, $10,000, 20,000, even $30,000 to help one person get re-employed. That process is called outplacement, another word for career transition. As I meet someone who’s just been fired or laid off, or when a prospective client wants to know how I can help them, this is the page I discuss. Please print the roadmap and use it as a guide.

The career transition process has been refined for 40 years, beginning with the oil & gas layoffs in the 1980s. When the price of oil went to $10 per barrel, companies cut staff by 50, 500, and 5,000 at a time. The “Career Planning Roadmap” is the model I use because it produces results. But it’s not just what you’re doing: the roadmap. It’s also how you’re doing it: the effort.

One of my clients was one of the country’s top cardiac surgeons. He did off-pump coronary bypass surgery, meaning he didn’t have to stop the patient’s heart for the procedure. That was unheard of.

When Tenner told me “There are 1,000 steps in a cardiac surgery, and 1,000 ways to kill a cardiac patient,” I asked him to explain. He said one step builds on the next, and you can’t skip steps or get too creative during the process, or you have a bad outcome.”

I was skeptical of the 1,000-step concept; so I spoke to one of my corporate clients, a medical device manufacturer who made tubing sets for cardiac surgeons. I asked him if there were, actually, 1,000 steps in the process. And he said, “Oh, no, . . . I think there are way more than 1,000.”

We don’t have 1,000 steps in a career transition, unless you count each phone call, email, text message, etc. But we do have a defined process, a roadmap, and if you skip steps or get too creative along the way, you might have a bad outcome, either no job offers or the wrong offer.

Take for instance, the idea of jumping right to resume writing. Many job candidates default to getting their resume together “as soon as possible.” Yet without the planning steps that come before, that can produce a resume that is generic or canned, too wordy, focused on the wrong ideas, or just plain terrible. A poor resume can undersell you, or eliminate you from the competition.

Likewise, many Type-A, super-achieving businesspeople can generate a dozen career opportunities in a few short weeks. The problem is, having no blueprint, they don’t know which situation is best, and often they make a bad decision, take the wrong job, and regret it deeply.

From the beginning we understand that we’re not just after a job, we’re after a situation that is nearly ideal. Big difference.

Therefore, we recognize that it will take time to plan our way through this process. How much time?

Covid has affected that. The world is slowed down, there’s increased complexity, more roadblocks, and we face new limitations. In the past it was standard to develop job leads in big face-to-face networking events. Now that’s much less likely.

Still, the goal remains unchanged, and we always keep the “95-98% good fit” at the top of our minds. So here are the steps in the roadmap:

This is a look deep inside and back into the past. We can use tools like the Cliffton StrengthsFinder or the Birkman assessment to tell us things about ourselves we might not otherwise know. And we can also rely on leadership questionnaires we’ve taken before.

The danger is too much information. Too many personal introspection exercises, too much research, too many contradictory websites. At the beginning of my career, I taught a course called “What Color Is Your Parachute?” after Dick Bolles’ book. Fifty people attended and said they loved the book. But they had notebooks full of self-assessment exercises and no way to pull them together, no way to focus.

I’ve found that the three simple exercises in this course, Likes and Dislikes, The Career Blueprint, and “the Ideal First Month in You New Job” are so basic and straightforward they set us up for success.

Completing this section gives a vision of your future. The Outcome is “FOCUS”

The importance of focus.
Focus may be the most important word in a career transition. For seven years I led a networking group for business leaders and professionals in career transition. Each month 40-50 came into our offices for breakfast. We had a speaker like an executive recruiter or vice president of human resources. After that I asked the group to introduce themselves taking less than a minute.

Very few attendees could do that. They stood up and said, “I have such-and-so degrees, I’ve been here, I’ve been there, I’ve done this and I’ve done that, I can do pretty much anything, really. I want to keep my options open.” When they sat down, the group couldn’t help them. We had no idea where they were going or what they wanted. One of my clients with this behavior labeled himself “A wandering generality.”

We ought to be able to explain in one or two sentences where we fit and what we’re trying to do. That’s sometimes called your “elevator speech.” But the point is, focus is our friend.

The heart of the resume is your work accomplishments and achievements. This is what you sell. (This is what sells you.)

A granite sign in my office says, “DVO FACIEM IDEM NON EST ISEM.” Meaning, “Two people can do the same thing, but it’s not the same.” No two architects will design it the same, no two trial lawyers will use the same arguments. You get the idea. We’re all different and special. 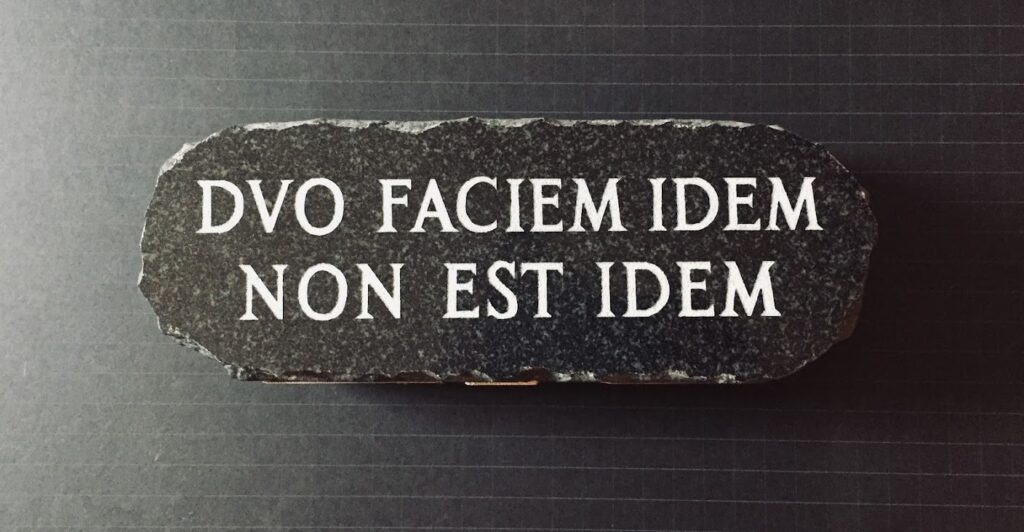 Your 6-8 core competencies, what you’re best at, are also different, special, and unique. It takes time to puzzle those out, but they follow the accomplishments. For example, if you saved your company $500,000 on an office lease, then “Contract Negotiations” might be one of your core competencies.

A Word About Job Postings
Being digital, we rely on software programs for everything: ordering groceries and restaurant meals, entertainment, dating, ridesharing, travel—you name it. So it’s logical to think that answering job postings is a great way to be re-employed.

By answering a job posting, you’re going to your greatest competition. Five hundred or a thousand others may have applied for the same position. The screening process is brutal and can take months. If you’re lucky, you might endure a series of punishing interviews only to be come up short as “number two.”

It can be debilitating and demoralizing.

I can’t remember a single client who has landed a high-level job from a job posting, ideal or just a stepping stone. It just doesn’t happen. (“But I was surprised to learn that one of my clients, a top commercial real estate development executive at Harvard University, had found his job on indeed.com/.)

I know job posting sites fill jobs, perhaps thousands of jobs, otherwise they wouldn’t exist. The question is, “Do they have your job?” and if so, what are your chances of actually being hired.

I never say don’t answer job postings. Rather, I say spend 5% of your time on job postings, not 95%. And only answer postings you feel passionate about where you meet the exact requirements. It’s tempting to say, “They’ll read between the lines and see my potential, perhaps for another job in the organization.” But that’s not how selection software, keyword searches, and understaffed human resources departments work.

Instead of job postings, we rely on building relationships, renewing friendships, and networking. In other words, talking to people. In a digital world it sounds outdated, slow and cumbersome, but in fact, it can actually be faster. Remember Aesop’s fable, The Tortoise and the Hare, which taught that “Slow and steady wins the race.”

When I began my consulting practice, I read a big thick book called “How to Market Consulting Services.” The first exercise said, “Write down 10 reasons someone might not hire you,” and I thought, “They might not hire me because they don’t know I exist.”

If companies don’t know you exist, they can’t hire you. Simple as that. Being seen is called “visibility.” Visibility is why politicians hit the campaign trail. It’s why businesses advertise and why Google and Facebook’s revenues are several hundred billion dollars.

A letter gives you both visibility and leverage. Where you can only talk to a few people each day, you can mail to hundreds. And if you put your story in letter form, you don’t have to repeat it endlessly with each new contact.

I took a course from Joe Sabah called “How to Get the Job You Really Want.” And years later at his 80th birthday party, Joe said, “Bill Frank is either the smartest guy I’ve ever met, or the dumbest guy, because he took my course three times.” I got my start with Joe.

Joe’s passion was letter writing. He taught his “Gold Form” which was a direct mail letter to companies. I tried direct mail with one of my early clients who was transitioning into the new field of computers. Even though Linda was changing industries, her letter produced a quick job offer and that success lit my fire on letter writing. I spent 10 years collecting career letters and published “200 Letters for Job Hunters” in 1989.

The “Friend Letter” may be the most important letter you’ll write. I use it with every candidate, and it has produced tremendous results. I’d go so far as to say, “A superb letter, when implemented well, with the correct follow-up, always works.”

(If you’re looking for more sample letters, we have a website with 1,001 cover letters, examples of every letter you could possibly need.)

After you write a great “Friend Letter,” and mail it to a 12-person focus group, the follow up is crucial. The articles in this section will take you away from “job hunting” and “job searching” into the world of creating friendships, and developing job leads and career opportunities. It’s a completely different mindset.  And it can make the career transition process fun.

These articles that follow are the heart of our success:

At this point, if you’ve followed the roadmap carefully, and completed the assignments completely, you will have developed both informational and hiring interviews.

Interviewing is a curriculum. I’ve debriefed hundreds of candidates after their interviews, asking a wide array of questions: where were they sitting, where were you sitting, what were they wearing, what did they ask, what did you ask, was it structured or unstructured, how much time did they allow? Did you get a chance to explain your value proposition, what was the culture like?

You get the idea.

Interviewing is important, because one small slip can eliminate you from competition. Didn’t bring enough hard-copy resumes? Too bad. Didn’t address the shy person in the room? Too bad. Talked more than you listened? Too bad.

The interview articles in the course set you up for success. And you might find yourself preparing four hours for an important one-hour interview. As you continue, you’ll develop “warm leads,” opportunities that could become offers overnight. Six to 12 is a good number of warm leads to juggle.

As you continue to follow up using the steps outlined in the articles, you’ll receive one or more job offers, make counteroffers, negotiate salary, and accept a final offer.

The outcome is a 95-98% GOOD FIT.  Which results in “Career Success and Life Happiness.”

When I finish explaining the roadmap to a prospective client, they usually say something like, “This is the logical step-by-step approach I was looking for. I can see exactly where we’re going. Let’s get started.”

I hope you’ve had the same reaction: Let’s get started.

No one, having been hired for their dream job, has ever said, “Bill, this is great. I like the outcome, but I believe we started too soon.”

:: Return to index of articles.