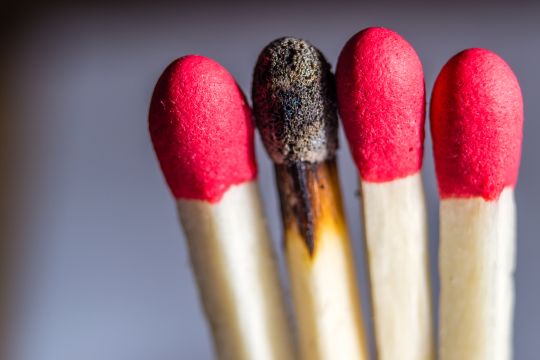 I’m a great believer in super success and high achievement, but there’s a point where working too hard or too much becomes dangerous, even life threatening. A woman I’ll call Karen was working as Chief Operating Officer where the entire $5 million company revolved around her. They were running lean and mean and she couldn’t hire more help.

Her boss, the CEO, had a young family and was seldom available. He called her at all hours of the day and night to press last-minute causes. She worked round-the-clock, even on weekends and holidays.

When I asked what she did outside of work, she said, “Nothing.” The overwork had caused serious health problems and she was on medication.

She told me about a recent vacation in New Delhi, India, with her teen-age daughter. During the day they saw the sights. At night they partied at the Imperial Hotel. When they returned to their suite in the early morning, she opened her laptop and went to work. It was reverse clock: although it was night in India, it was the beginning of the day in the United States.

She said, “I conducted my business day as usual, got 2-3 hours of sleep, and then returned to tour India. I continued this for the entire weeklong vacation.”

I painted a different more normal future for her, and we created a blueprint of what her days and weeks might look like. We filled in the blanks with what was missing: fun, family, friends, and time with her daughter. We saw that she belonged in a new industry, in a doing-good company, one making a difference. She wholeheartedly agreed and was encouraged.

She felt desperate to get out of her current situation. Yet she was still drawn to it and made excuses for the CEO. “He needs me, can’t get along without me, has no one else to rely on,” she said.

I pointed out that there is a job market where he could hire her replacement. She stalled and got trapped in this circle. She desperately wanted out, but also desperately wanted to please the CEO. This continued for several months, until I was very worried about her. Her physical symptoms like headaches and insomnia got much worse.

I said, “I’ve never told anyone this before, Karen, but I’m afraid this job will literally kill you. I’m afraid you’re going to die.”

She broke down crying, and agreed that the job might kill her. It was the moment she decided once and for all to leave. Since slowing down or hiring more help weren’t options, I encouraged her to enter the job market. Money was not a consideration. She’d been frugal and well paid with plenty of financial reserves in the bank.

We prepared a resume and transition plan to leave the company. We practiced a resignation script, the lines she would deliver to her boss. We set a date for her resignation. On that date, she didn’t resign, as I knew she wouldn’t. I had planned that into our process.

We continued our work and set a second and final time and date for her departure. That day came and went, and she didn’t answer my voicemails or emails. After several tries, I stopped calling, and Karen has never called me back.

As I said, I’m a great believer in super success and high achievement, but there’s a point where working too hard or too much becomes dangerous, even life threatening. That’s when it’s time to stop.